Innovation at CERN: Big Data and the Higgs Boson

The confirmation today of the existence of the Higgs Boson is notable not just in the field of Particle Physics but in that of Computer Science. The mechanics deployed in the LHC continue a legacy of  notable contributions to computing by CERN. Tim Berners-Lee, a scientist at CERN, invented the World Wide Web in 1989. The Web was originally conceived and developed to meet the requirement for automatic information sharing between scientists working in different universities and institutes around the world. 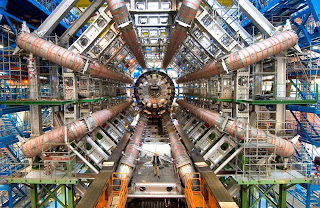 Data requirements of the late 1980s can appear insignificant when compared with those associated with the LHC in 2012. When operating, around 1 petabyte (1 million gigabytes) of raw data is processed EVERY SECOND and approximately 1 percent of that is stored. Managing this kind of information system has led to new Big Data infrastructural initiatives, such as the Helix Nebula.

CERN research in the past has had profound and enduring consequences for Information Technology. Who can say what exciting developments will emerge in that field as a result of work done to enable today's announcement?
Posted by Unknown at 12:15 AM